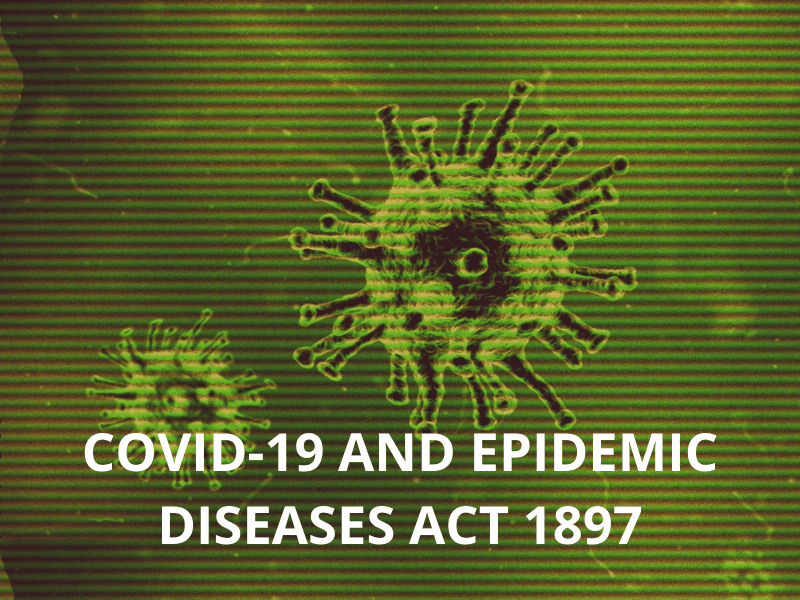 The rapid proliferation of COVID-19 across the nation has put the entire country at a standstill as almost all institutions are shut down except for essential services. With the entire country under a strict lockdown, the only legislation that the Government has enforced to control the outbreak is surprisingly 123-year-old legislation, The Epidemic Diseases Act,1897.

The Epidemic Diseases Act,1897, is colonial legislation that was introduced in India during the time of the Bubonic Plague in the late 1890s. The basic premises of the legislation was to prevent the spread of dangerous diseases by restricting social gatherings and huge crowds. However, by giving the authorities full immunity against the law by acting in good faith under the Act, the legislation was largely used to control social gatherings by resistant groups. The provisions of the Act were even used to arrest Bal Gangadhar Tilak for publishing articles regarding the on-going Bubonic plague at the time.

Know how to treat coronavirus patients at Home

In most cases when the Act was enforced, there was no ambiguity, or it was generally an outbreak of a disease that was already in the books and had a known treatment for it. For example, the legislation was enforced in 2018 to prevent a cholera outbreak in Gujarat. The COVID-19 outbreak presents a peculiar case where there are no proven treatments or medications that are known to cure the virus.

The Epidemic Diseases Act, 1897, was first enforced in Karnataka on March 11,2020 when the number of cases rose to 29 during that time. The Act is only efficient in restricting crowds and huge gatherings of people. Besides the fact that it gives extraordinary powers to the authorities to do just about anything to prevent the spread of the disease, it stays quiet regarding possible strategies and measures to be taken in order to contain an epidemic of such scale. The Act gives no information regarding medical protocol, treatment or distribution of vaccines. There is also no mention of protection of human rights principles when measures are taken to control the disease.

India presents a grave problem with lack of testing kits and hospital beds to treat the affected people. With testing kits enough to treat only about 2% of the country’s population, many cases still go unreported thereby increasing the chances of transmission.

Buy COVID-19 essentials and disinfect your Home and workplace

It is no doubt that there is an immediate need to update the laws in order to fit the present scenario. Neither does the law define what may be considered as an epidemic nor does it talk about effective response measures. While social distancing can reduce transmission to a great extent, with the absence of a permanent solution, the number of cases only keep rising.

There is an absolute need for effective measures by the present government to come up with a uniform medical protocol while also increasing the scale of testing and further treatment. The National Disaster Management Act, 2005, provides a protocol against disasters of all kinds. Not only does the Act have proper definitions and descriptions as to what a disaster maybe, but also explains implementing measures as well as agencies to be instituted in case of such emergencies. It was enforced in Jammu and Kashmir to curb the transmission of COVID-19.

As matters get worse and more and more people are affected every day, it is essential for both the Government as well as individuals to take necessary precautions in order to prevent transmission.

I’m a 2nd-year law student in Bangalore. I like writing and reading. I like to learn new things and I love working on new projects.

5 of the most important Emergency numbers you can call in India?

How COVID-19 Is Affecting Our Daily Life?