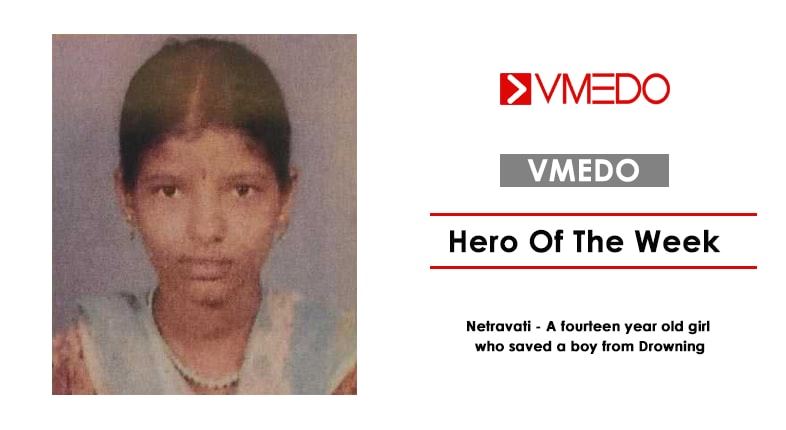 A Fourteen-year-old girl who saved a boy from drowning is our VMEDO Hero of the week.

Fourteen-year-old Netravati M Chavan from Bagalkot district, who died while trying to save two young boys from drowning, was chosen for the National Bravery Award.

While she managed to rescue 16-year-old Muthu from a stone quarry pond, she died in a failed attempt to save 10-year-old Ganesh.

Netravati was the only child from Karnataka to get the National Bravery Awards in 2017 announced ahead of Republic Day. She will be posthumously given the Geeta Chopra Award, Her father Mahantesh Chavan received the award from Prime Minister NarendraModi on January 24.

Netravati’s family, from Vaddarahosur in Hungundtaluk in Bagalkot, migrated to Kannar near Udupi for work. Mahantesh worked at a quarry while his wife and two daughters joined a nursery. Though she was a brilliant student, Netravati couldn’t continue her studies after her Class 7 as her father asked her to care for her two ailing brothers.

The family returned to Vaddarahosur in May 2017 to attend a festival. On May 13, Netravati went to a quarry in her village to wash clothes.
Due to heavy rain, the 30-feet-deep quarry was filled to the brim and her two relatives Muthu (16) and Ganesh were swimming in it. When Netravati noticed the boys drowning, she dived in to save them. Netravati dragged Muthu to safety. She then tried to rescue Ganesh, who panicked and grabbed Netravati’s neck and choked her.

She might’ve only been 14 but what she did was deeply inspiring for every human being on the planet as Abraham Lincoln once said: “the finest thing a man can do is save a life”. We remember her courage and we are honored to say that she’s someone that deeply inspires every one of us here at vmedo. We believe she’s a true hero.

Junk Food is rendering you with memory loss

How to Shift Elderly Parents Living in a Multistory Building?