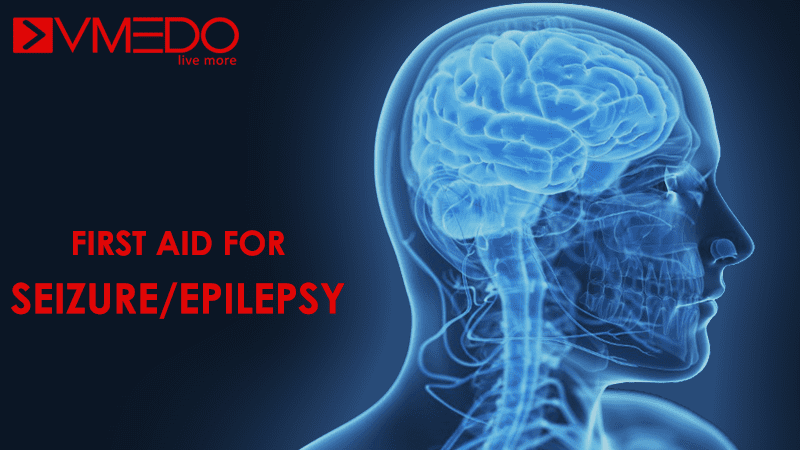 1. If the person is falling down at the beginning of the seizure, try to prevent the injury as she falls. Note the time seizure started.
2. Move objects that are dangerous away from them. And do not move the victim while she is having a seizure.
3. Loosen any tight clothing like a tie, belt that is making the person hard to breathe. And protect their head with folded cloth or cushions.
4. After the seizure, the person may fall into deep sleep. Place them in a recovery position. And keep checking her breathing.
5. Stay with the victim until she has recovered fully.
6. If you are not certain that the victim is susceptible to epileptic seizures, call the emergency medical helpline.
7. Call an Emergency medical ambulance if,
The person does not regain consciousness after the seizure.
If the victim is injured.
If the victim is pregnant.
If the seizure is more than 5 minutes.
If the seizure in water.
They have another seizure without recovering fully from the first seizure.

Important:
1. Don’t give anything by mouth during the seizure.
2. Move the dangerous objects away from them.

Causes of Epilepsy/ seizures:
Some of the main causes of Epilepsy/ seizures include:
1. Low oxygen during birth.
2. Head injuries that occur during birth or from accidents during youth or adulthood, Brain tumors, and stroke.
3. Genetic conditions that result in brain injury, such as tuberous sclerosis
4. Infections such as meningitis or encephalitis
5. Abnormal levels of substances such as sodium or blood sugar
6. Missing medication doses
7. Heavy alcohol use, Cocaine or another drug, such as ecstasy, use
8. Other drugs that interfere with seizure medications

Prevention:
If the seizures are due to other medical conditions, knowing and treating such triggers is the key to prevention.
• Lack of sleep and stress certainly may increase the seizures in some people with epilepsy.
• Since the cause of epilepsy is often not clear, it generally is not possible to prevent it.
• In some people with epilepsy, certain severe triggers can lead to a seizure. Identify and watch for particular triggers, environments, or physical and emotional signs. It’s not uncommon, for example, to feel annoyed or related several hours prior to a grand mal seizure, and immediately before the attack.
• When the preliminary signs include depression, irritability, an extra dose of medication (with a doctor’s approval) may help prevent an attack.
• Learn stress management and relaxation techniques.
• Avoid bright, flashing lights and other visual stimuli.
• Avoid playing video games.
• A regular pattern of food &amp; sleeping is also important.

Frequently Asking Questions:
1. What is epilepsy? What is a seizure?
Epilepsy is a common chronic disorder of the brain which is characterized by recurrent unprovoked seizures which cause electrical activity in the brain for some duration that causes a temporary disturbance in brain cells.
A seizure is a short abnormal disturbance/disruption in common brain activity.  Seizures are the main sign of epilepsy and its symptoms include a person to fall, shake and loss of consciousness of what’s going on around them.

3. What can I do to manage my epilepsy?
Self-management is the best way to take care of epilepsy.
Few tips to manage epilepsy include
Take your medicine.
Recognize seizure triggers
Keep a record of your seizures.
Get enough sleep.
Stress management.

If you are looking for first aid, CPR, AED, and Basic Life Support training program  Click here and Register.

How to ensure construction site safety?