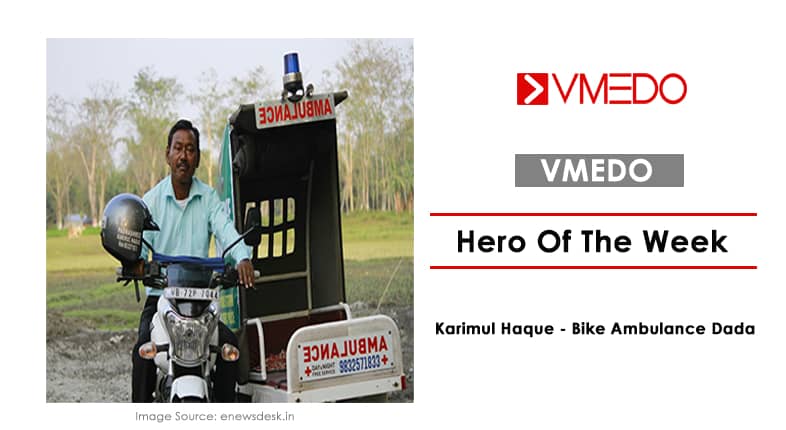 Karimul Haque who’s known as Ambulance Dada is our Hero of the Week.

Meet Karimul Haque, a tea garden worker by profession, who runs a bike ambulance to ferry road accident victims or the ill and poor people to the hospital so that they can get the medical attention at the earliest. People call him ‘Bike-Ambulance Dada,’ for his free of cost bike ambulance service which runs 24×7.

Karimul lives in a remote village Kranti in Jalpaiguri district of West-Bengal, where roads are not proper for entry of a four-wheeler ambulance and the nearest public health center is 8 km away.

The inspiration for starting a bike ambulance service in his area came from a sad incident when his mother suffered a heart attack in the wee hours of the night and he was not able to take her to the hospital due to the non-availability of the ambulance facility. He had no other option other than watching her mother die.

Initially, people took him as a fool but when they started getting help in times of crisis they started appreciating and recognizing him for his selfless service towards his villagers. Now, he is like an angel sent by God for helping the local residents.

His selfless service for over the last 8 years has not gone unrecognized and he has also been awarded the fourth highest civilian award in the country, Padma Shri

VMEDO Appreciates Karimul’s work towards the welfare of society and congratulates him for receiving Padma Shri. We are in dire need of people like him. For his selfless work, we consider him our hero of the week.

Importance Of Learning How To Use AED